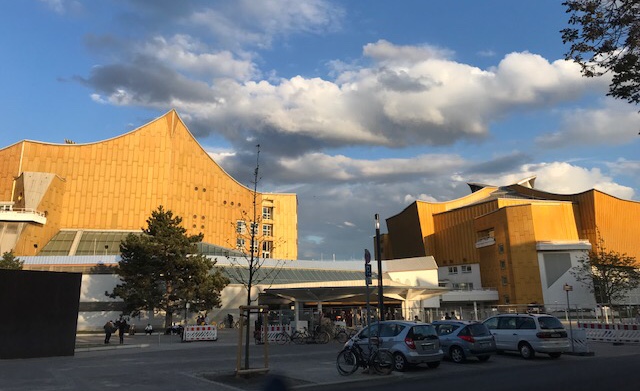 Berliner Philharmonie – mastered space as a reflection of humanity

The famous writer Max Frisch declared the building of the Berlin Philharmonic Orchestra one of the great creations of the century, incomparable, one of the most beautiful spaces ever created by architecture.

Since my childhood I have been to the Berliner Philharmonie several times a year. Of course, there were years with breaks where classical music did not fit into my life or when I was abroad.

I remember my teenage years when we were more or less forced to accompany our parents to various concerts, and we fell asleep immediately after the music began and everyone became silent. Life was too exciting and the nights too short. But from time to time e.g. during pieces by Shostakovich we would jump up from our seats when the music was intense and loud …

The history of the Berliner Philharmonie begins in March 1882, when 42 members of the „tried and tested“ orchestra of the famous music director Benjamin Binse declared their independence for economic reasons. The „rebels“ had to play in places like the „Flora“, a large restaurant on the site of today’s Schiller Theatre. It was not unusual for philharmonic concerts to be accompanied by the chink of coffee cups forming an audible counterpart to the music. However, the autonomy of the orchestra could only be maintained at the cost of an extreme self-exploitation.

Somewhat later, a former ice rink was converted into a concert hall, the Philharmonie, with 2000 seats. In October 1882, a new fifty-strong Philharmonic orchestra began its first season and subscription concerts were introduced and famous composers such as Felix Mendelssohn-Bartholdy enthused audiences. 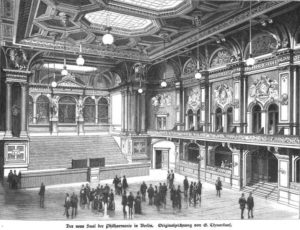 It was not so much the architecture of the old Philharmonie, designed by Franz von Schwechten, that thrilled, but rather the music and the conductors such as later Wilhelm Furtwängler, who began there in 1922. It was he who eventually, on 20 January 1944, conducted the final concert in the Alte Philharmonie. A few days later, the building was destroyed by air raids.

The orchestra then moved from venue to venue, first to the National Opera, then to the Admiral’s Palace and finally the Beethoven Hall, where it performed almost up to the capitulation and the end of the war. In 1952 the orchestra reconvened and played in the Titania Palace in Steglitz, conducted by, yes, again Wilhelm Furtwängler.

Other great conductors and soloists such as Otto Klemperer and the brilliant violinist Yehudi Menuhin returned to Berlin and from 1954 played in the newly built concert hall of the Musikhochschule at Hardenbergplatz. Soon the hall with its 1200 seats became too small, especially under the famous conductor Herbert von Karajan.

The association of the friends of the Berlin Philharmonics was founded on private initiative by renowned personalities such as Theodor Heuss, the first President of the Federal Republic, Konrad Adenauer, the first German Chancellor and Ernst Reuter, the first mayor of West-Berlin. Lotteries, tombolas and other activities were organized and more than 1.5 million marks were collected. The society organized an architectural competition for a new philharmonic orchestra.

In the summer of 1956, Hans Scharoun won the competition for the construction of a new Philharmonic to be located in West Berlin. Although he was awarded the prize for the best design his modern avant-garde design greatly antagonized. Normally, the orchestra is staged in concert halls set up like theatres. Scharoun working on the basic idea that people listen to improvised music in a circle, transferred this natural process to his concert hall. The music was in a way secularized and not exclusively addressed to the upper parts of society.

His model was courageous, bold and complex and differed significantly from all other entries. As was to be expected the project led to fierce controversy. Herbert von Karajan was one of the most convinced supporters of Scharoun’s design and influenced its realization. The Berlin Government commissioned Scharoun to build the new Philharmonie on Kemperplatz, close to the Tiergarten and Potsdamer Platz, an area devastated by the war. 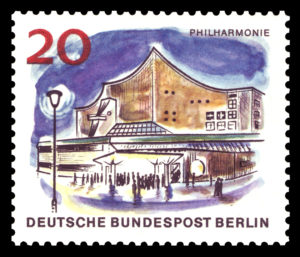 In 1956, Scharoun was already a well-known architect and urban planner and known for his ability to reinvent space. Scharoun called his design a spiritual recreation room for the „free man“ and with „music at the centre of things“. The Philharmonie was surrounded by further creations by Scharoun, such as the Hall of Chamber Music, the National Institute for Music Research and the National Library.

Rooms for „free people“ with space for communal activities were one of the goals. Scharoun developed spaces organically from the inside to the outside with the idea of a correspondence between building and landscape. He wanted a transformation of flowing transitions of the music into his architecture. Together with his collaborator Edgar Wisnieski, he created this modern avant-garde forum on the empty space of what once had been one of the noblest and most fashionable residential areas in the city centre. An area that had been levelled by the Nazi government to make way for the Germania Project. Hence the idea was to redesign the space as a democratic alternative to the fascist megalomania and to create a spiritual renewal.

The dynamic shape of the roof therefore soon became the symbol of the new Berlin Philharmonie and one of its unique characteristics. Scharoun’s dream was to create „formal waves“ and tent-like structures on the roof. „Phoenix“, a light metal sculpture by Hans Uhlmann, crowned the roof construction.

The Philharmonie opened with the 1963/64 season. Herbert von Karajan conducted Ludwig van Beethoven’s Symphony No. IX. The Scharouns, Mayor Willi Brandt and the artistic director Dr.W. Stresemann were present at the opening on 15.10.1963. Music lovers waited for five days in a queue. The Berliners loved the curved dream ship with its prominent portholes and its tent-like ceiling and named it Circus Karajani after the Circus Sarrasani, a famous circus of those days.

The new Philharmonie had a capacity of around 2340 seats and a volume of 26,000 cubic metres to reach the required airspace of around 10 cubic metres per person. The reverberation of the new hall was a real challenge for the acoustic engineers. They achieved it by raising the height of the ceiling to 22 metres above the platform. To prevent the sound from being dispersed in only one direction, reflectors were applied to reflective surfaces, protruding gradations and balustrades, so as to also ensure that the musicians could hear each other. This is much more easily in halls whose platforms are framed by straight walls. 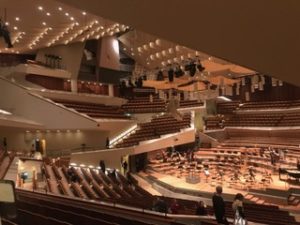 Three convex arches achieve a uniformly diffused sound around the hall. The rising rows of seating and the shape of the ceiling transport the sound in waves to the most distant seats. Scharoun created a space for cultural and social changes. He created the prototype of a new concert hall that brings the audience closer to the action and process of making music. Music becomes intelligible from every corner of the hall. Due to the circular arrangement, no seat is more than 30 metres away from the stage.

Through Scharoun’s influence the model of the traditional „shoe box“ as a concert hall design was abandoned. Although unique in its complexity and vitality, the architecture of the Berlin Philharmonie has influenced many architects around the world. Examples are the Sydney Opera House (1973) by Jorn Utzon, the Leipzig Gewandhaus (1981) by Rudolf Skoda, the Suntory Concert Hall in Tokyo (1986) by Shoichi Sano, the Parco della Musica in Rome (2002) by Renzo Piano and the Walt Disney Hall in Los Angeles (2003) by Frank Gehry.

The foyer of the Berlin Philharmonie is also very impressive. It is clearly divided into areas with asymmetrical stairs and a large double V-support. The four glass paintings by Alexander Camaro are extraordinary. One of these window panes shows different red tones, the others change colour between brownish-gold, grey-pink and bluish-green. The mixture of colour emissions and natural or artificial light enhances the effect. The light sources create a bright and lively atmosphere throughout the room. Spherical lamps, each consisting of 72 pentagonal sections and the floor decorated with coloured class mosaics, emphasise the play of light. 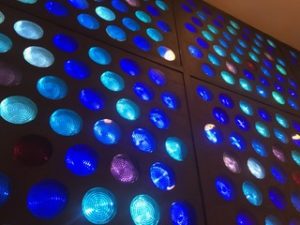 In 1988 a huge piece of plaster broke off in the main hall and landed near the conductor’s podium. The Berlin government decided not only to renovate the roof of the Philharmonie, but to replace it entirely. The reopening in 1999 under the then director Claudio Abbado (who had followed Herbert von Karajan) was a complete success. In 2007, the orchestra celebrated already its 125th anniversary with then chief conductor Sir Simon Rattle, who is departing in 2019.

Since the opening of the Berliner Philharmonie in October 1963, the building has retained in its exclusive, unique form, even though the appearance of the audience has changed. Initially people would arrive in fancy evening dresses, men in tuxedos and ladies in ball gowns were a familiar sight. Today people are mostly dressed in a casual and colourful way.

During breaks it’s funny to see how everyone descends into the foyer and queues up for a quick glass of champagne and a pretzel during the break. The clever ones have made a reservation beforehand. You pick up your drink at the table with the assigned number. The unfortunate others are obliged to down the expensive liquids in a gulp, as soon as the gong strikes. 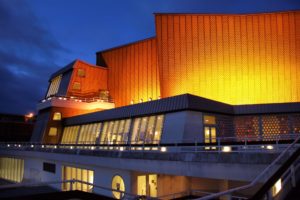 The last concert I attended was in the spring of this year. It was so fantastic that it motivated me to write this blog post. Martin Grubinger, the young and wild percussionist, and the conductor David Robertson and were simply ingenious…

Therefore, for Music lovers a concert at the Philharmonie or Hall of Chamber Music is a must on any visit to Berlin. See, listen and enjoy!