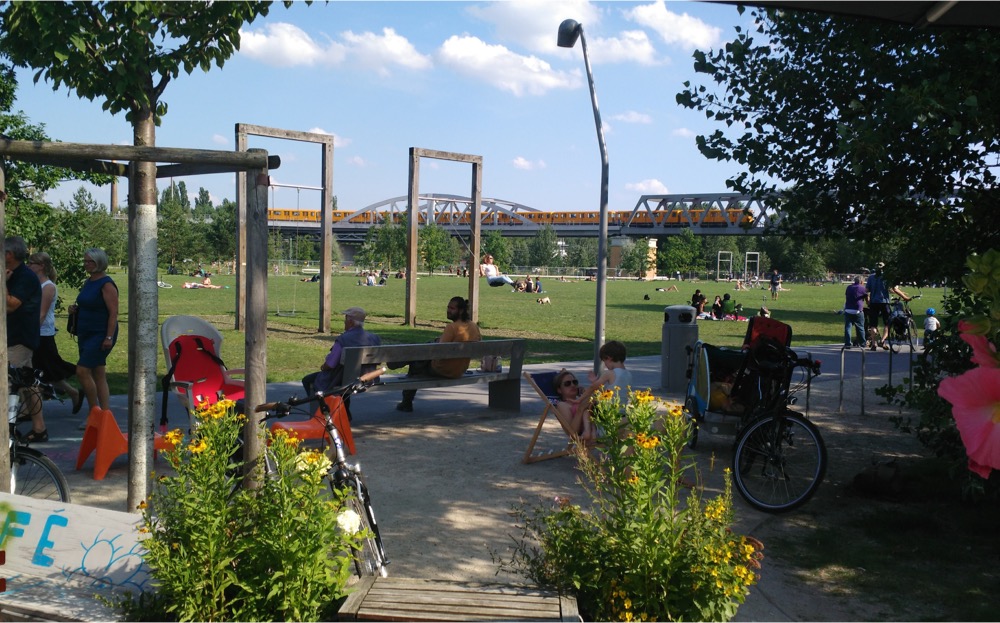 Park am Gleisdreieck – an urban park at its best

Do you know these beautiful images of architectural concepts for buildings or parks: nice and colorful, blue sky, a lot of people around enjoying themselves? The problem: when you eventually come to the built result it looks totally different: the building kind of grey, no people at all around, no joy or life to feel, just some space covered with boxes or concrete wasteland, a yawning emptiness. But Berlin has one great example that this doesn’t have to be. A place which looks and feels in reality exactly like on the best architectural concept: the Park at Gleisdreick – a jewel of urban landscape architecture!

How did this most lively place of the city come into being? Well it is yet another example of which enormous changes the city has seen from 100 years ago to today. Because at that time this area was an „iron landscape“ as famous writer Joseph Roth called it. Here were in the huge marshaling yards leading up to two train stations: Potsdamer Bahnhof and Anhalter Bahnhof, at that time the main station of this metropolis. But not enough, in 1912 the Berlin city planners added two overhead railways cutting right across the yards. Those met in a intersecting station called Gleisdreick – „Track Triangel“. 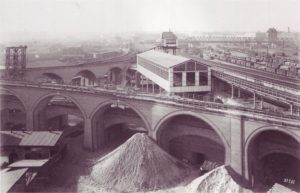 The atmosphere in this area Joseph Roth describes like this: „Iron landscape is maybe the word which best describes this place where machines bustle. Iron landscape, magnificent temple of technology under the open sky, for which the milelong chimneys offer a sacrifice of lively, fertile and motion bearing smoke. An eternal worshipping service of machines in the wide landscape of iron and steel, the end of which no human eye can reach and which is only limited by the grey horizon.“

With such a central function for supplying goods and moving people to and from the city you would think, this area would never change. But not in a city which sees the final battle of a world war and is later divided in four sectors and two political systems. All of a sudden, the two stations are rubble, the yards are bombed and the land belongs to a different political unit then the train tracks: even though the ground were part of the American and British sectors the administration of the old Reichsbahn train system is completely handed over to East Berlin authorities. When they stop operating trains driving into West-Berlin in 1952, the area sees no reconstruction and falls into sleep. 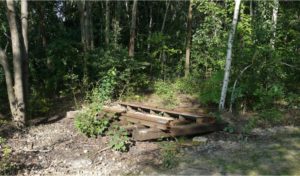 Over the next three decades the area around Gleisdreieck becomes a fascinating example how quickly nature reclaims any, even the most steel-robust technology-altered landscape. Even though there was no layer of humus and the poor, sandy soil was cealed with stone pavement, rusty train tracks and gravel, within a few years an astonishing variety of life showed up turning eventually in an unplanned jungle-like biotope. In 1980 a biological study counted 413 types of plants, 10 species of mammals and 112 of butterflies. So no wonder local initiatives soon started to look for possibilities how to turn this area into recreation and natural spaces for the Berliners. But the legal situation was stuck: the ownership of the area was still registered for the no longer existing German Reich, the sovereignty about the area was in the hands of the Allies and the use of the dead marshaling yards in the hands of the East German Reichsbahn authorities. It needs a world changing event for things to start moving here again: the fall of the wall.

With the unification of the country and the city also the two public railroad companies were united and eventually privatized. For the goal of going public the company now looked for all possibilities to become profitable and started selling unused land properties. The company eventually reached an agreement with the city to be able to sell the most valuable parts of the old marshaling yards at Potsdamer Platz to private investors when at the same time it handed over about 16 ha to the city for the development of a park. And thanks to the German Law of Nature Conservation the financing of the park was also quickly secured: because the private investors were sealing 90 percent of the ground at Potsdamer Platz with concrete and stone they had to pay for the creation of compensating natural spaces – the park next door.

But, the park did not come up as quickly – but only two decades later! The reason: in the new democratic spirit of reunited Germany the city authorities had agreed to develop the new green spaces with the involvement of the Berlin citizens. And that meant a process of five parties working together: the Senate of city development, the two Berlin districts Friedrichshain-Kreuzberg and Tempelhof-Schöneberg, the planning architects of bureau Loidl, a city owned company as building contractor and the citizen initiatives. Eventually over a period of 25 years not only 70 joint meetings took place, but also a represesentative public survey was conducted, an internet dialogue, joint field explorations, idea and planning workshops and a public presentation. Even though you can argue about the amount of time spent, but with no project before there was such a vivid people participation in the city, not only before but even during the planning and construction process. And: the result is magnificient. 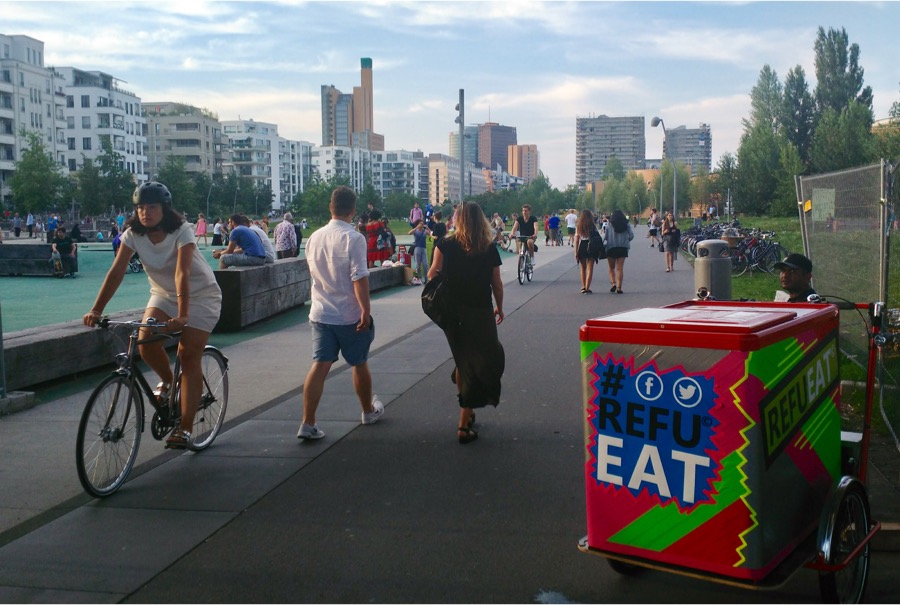 Today the park is one of my favorite spaces in the city. It is to me an almost perfect meeting of city and nature. When you see the yellow trains rumble over the grey steel bridges through the green park you feel like in a miniature world. Where a master planner has designed very diverse areas and feelings, from clearcut lawns for picknicks and sports to wild bushes and flowers, playgrounds and halfpipes, gravel rockfields and beautiful designed wooden park furniture. And in between: fathers on leave with their babies, cyclists, runners, skaters, lonely readers on benches, big Turkish family Picknicks, fitness groups meeting through Facebook, kids from the block with Bluetooth soundboxes, dogs walking people, trained bodies playing Beachvolleyball and graffiti sprayers working publicly to name just a few. Just like on an over-the-top architectural concept. But here is it true life. 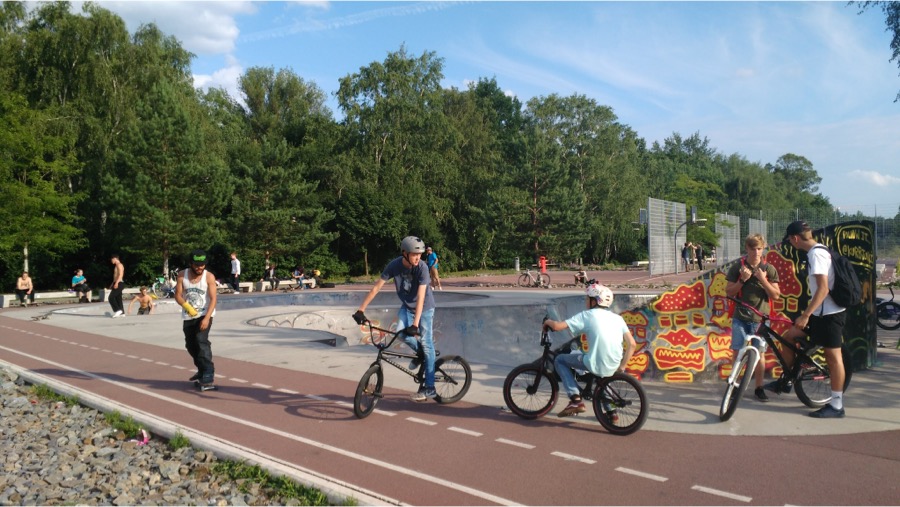 If you like to see this and other hidden jewels of Berlin life don’t hesitate and ask one of our guides: he will take you on a bike tour through the city which is the most fun way to explore the green Berlin! 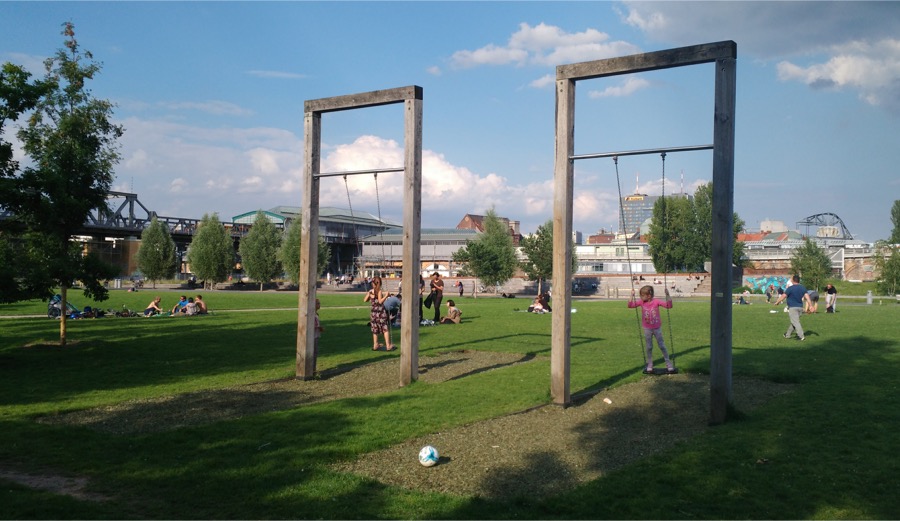 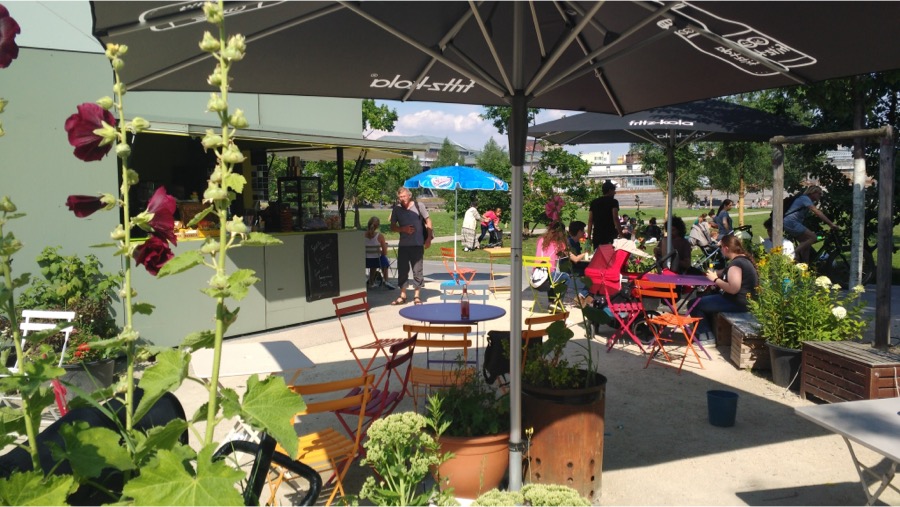 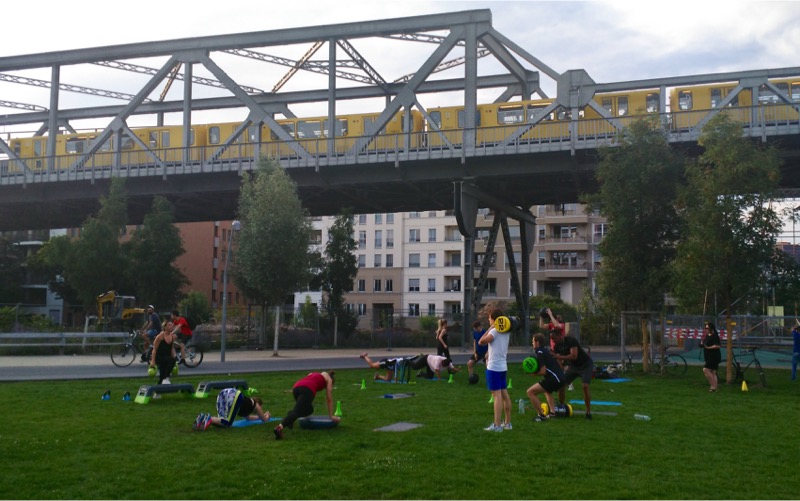 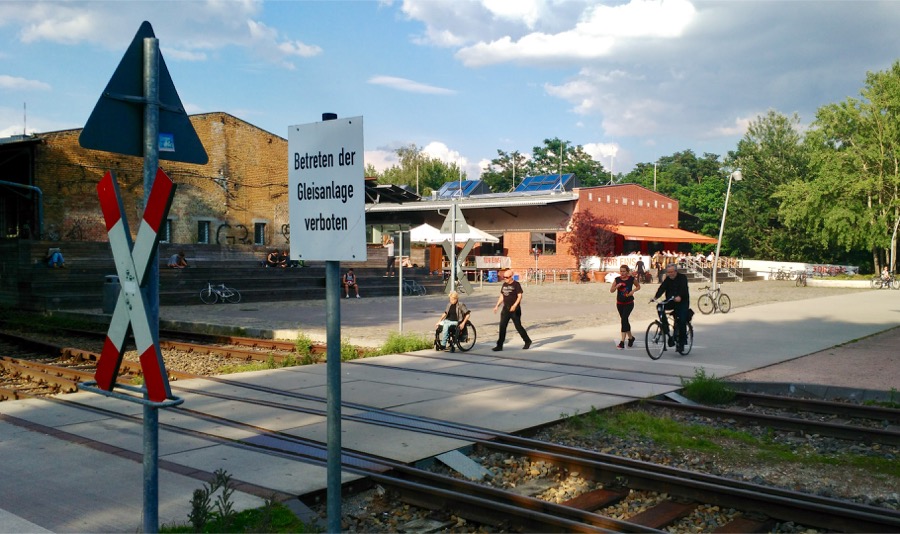 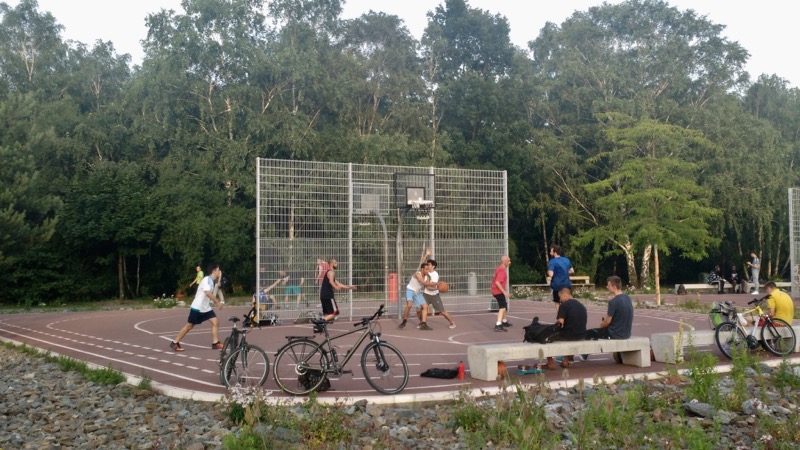 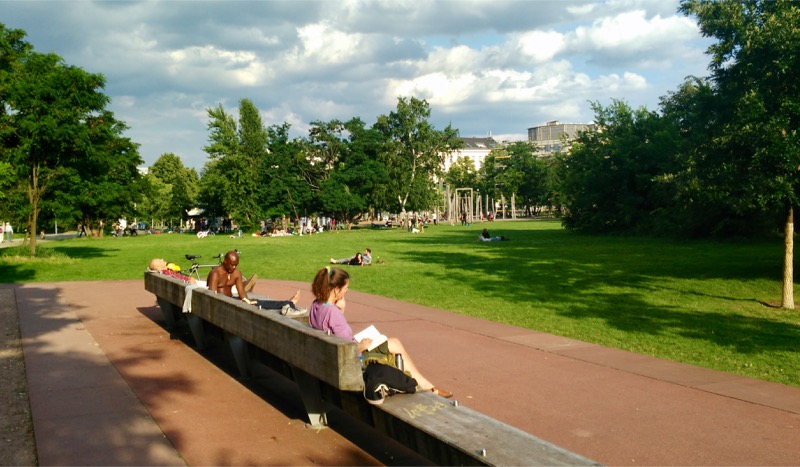 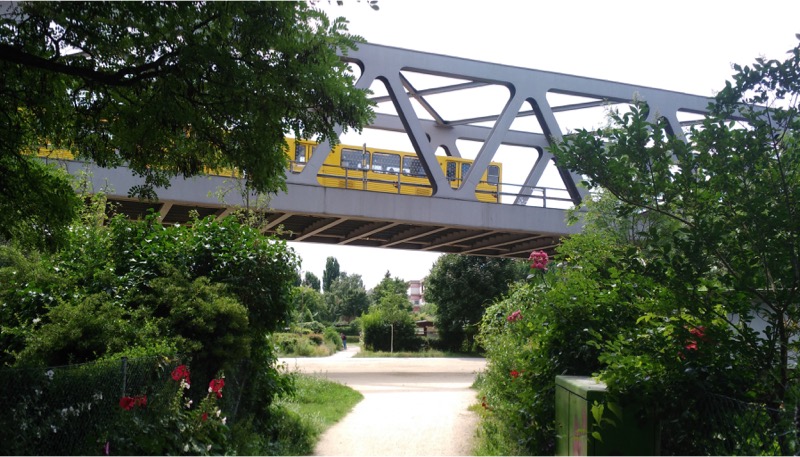 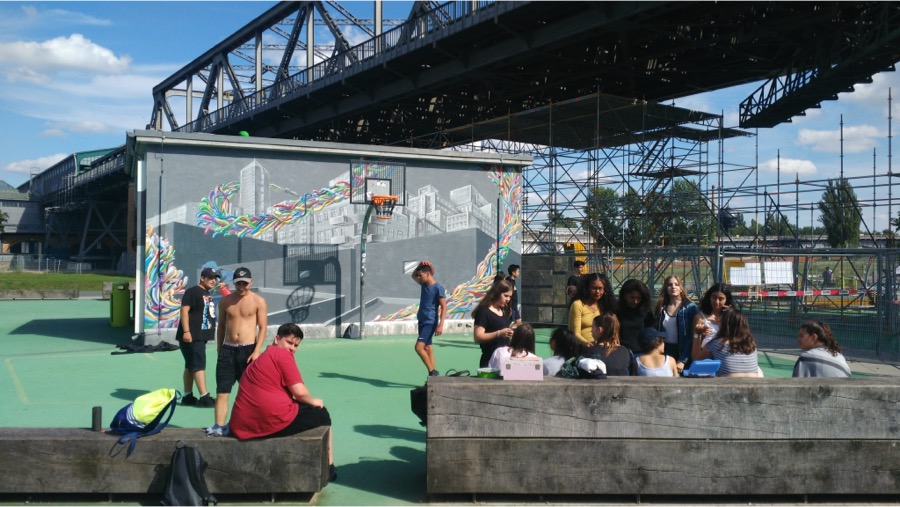 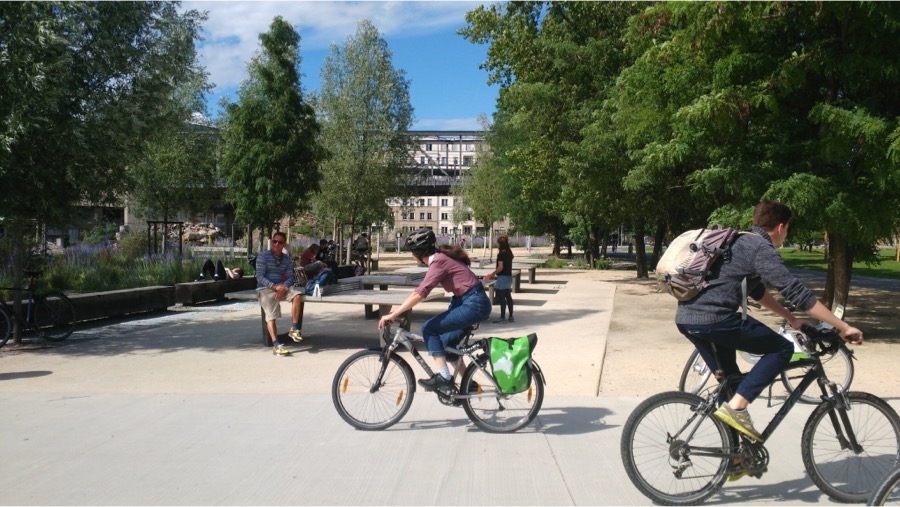 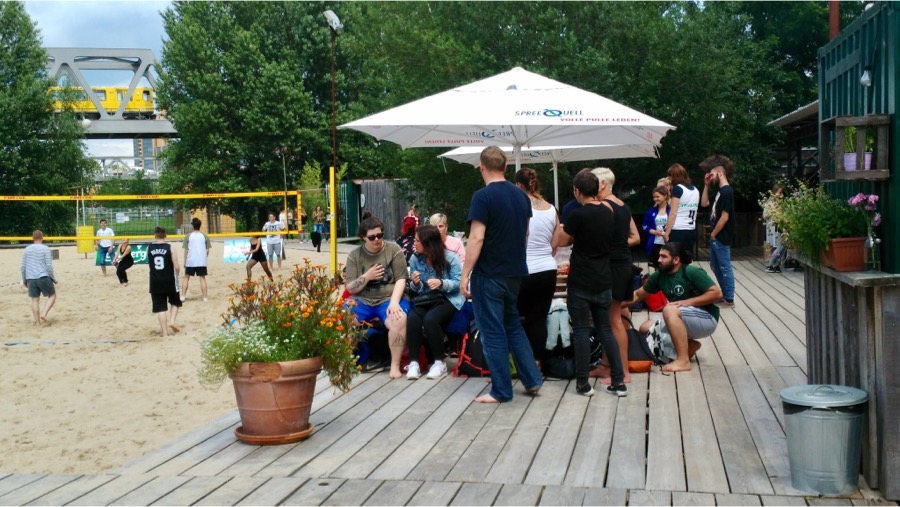 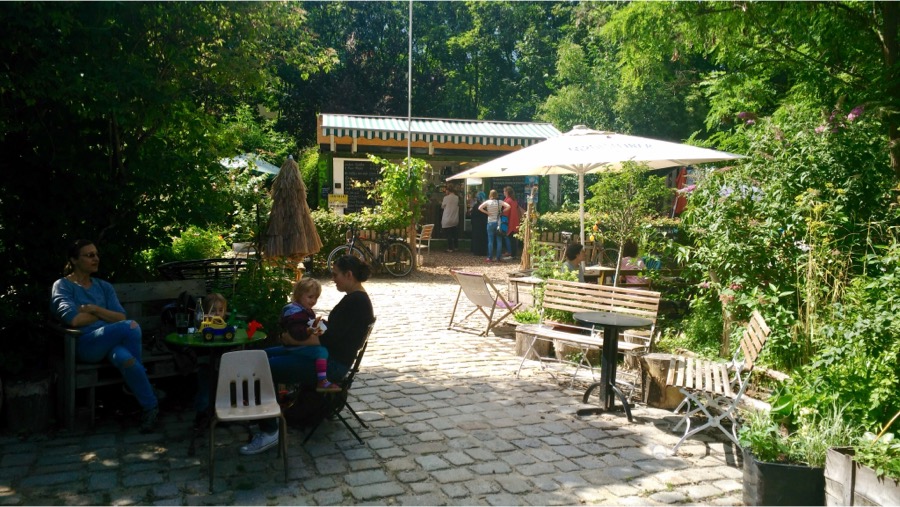 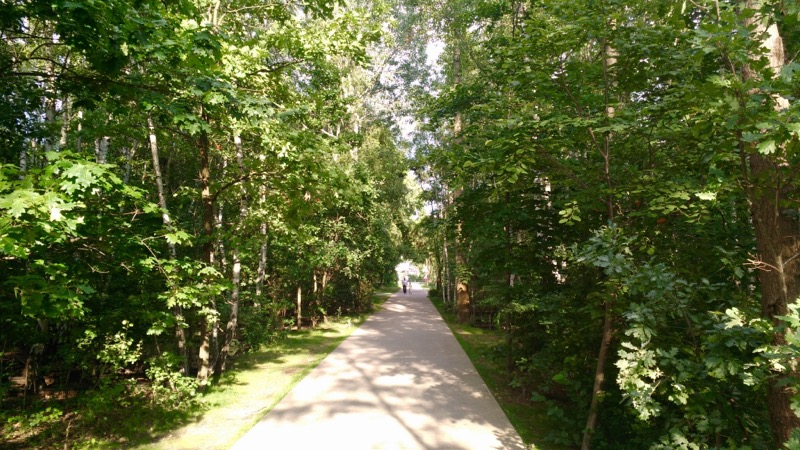