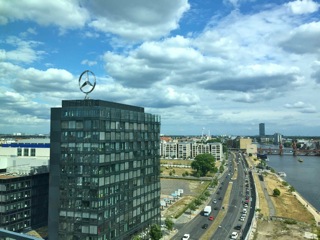 Berlin‘s skyline is incessantly changing. Nothing stays as it was. Like in a game of jackstraws things keep getting reshuffled and new townscapes emerge. Open spaces are filled creating new urban quarters. The former death strip, meandering through the city at the divide between East and West Berlin became a field of experimentation for star architects from around the world. 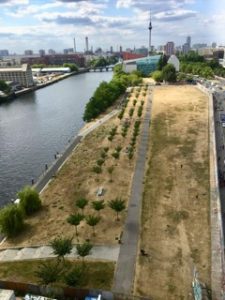 The new governmental district and the resurrected Potsdamer Platz did their part to dispel the tristesse of Berlin’s old centre, reawakening it to new life. Potsdamer Platz, once the broadest part of the former death strip, has now turned into a miniature version of Manhattan with three skyscrapers and the Sony Center. Up to then, with few exceptions, buildings were never higher than 22 metres (around 66 feet) because the old fire-department regulation was in place which required every roof to be accessible with a turntable ladder.

A real eyecatcher is the Kollhoff Tower, a building with a brick façade, at Potsdamer Platz which disposes of the fastest lift in Europe putting it in strong competition with the TV tower at Alexanderplatz. In conjunction with the office building designed by Renzo Piano, the Kolhoff tower forms a gateway to Potsdamer Platz. 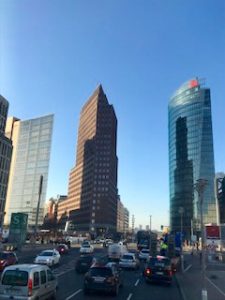 This high tower block, a triangular structure which tapers at its top, moves down in steps thus adapting to the eaves heights of the surrounding lower buildings. Between the wings of the building there is a glass-roofed atrium, which serves as distributer for the internal access. With its aesthetic appearance and urban presence, the building links to traditions of urban skyscraper architecture of the first half of the 20th century, especially in the USA.

Triangular structure and pyramids of glass are likewise favourites of renowned Chinese architect Ming Pei. He was influenced in his aesthetic expression through his studies and long-term stay in the USA. With the annexe to the German Historical Museum in Berlin, Pei created a symbiosis between old and new.

This unique building is located right next to the former arsenal of the city, a baroque building more than three hundred years old, which today features the main collection of the German Historical Museum. The Arsenal’s inner court yard in turn is famous for the depiction of the faces of dying soldiers, works of the baroque sculptor Andreas Schlüter. This formerly open courtyard was covered by Ming Pei with a modern glass and steel roof. 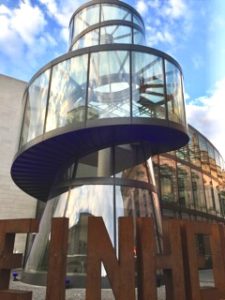 Back to the annexe: The glass façade reveals the interior features, among them the remarkable winding staircase. Looking out from within, one benefits likewise from the transparency: Pei, said to be great admirer of Karl Friedrich Schinkel, allows a view of this architect’s renowned New Guard House.

Some of the new and conceptually well elaborated architectural works do not immediately strike the eyes. This happened to me with the embassy of the Netherlands, which I recently visited with guests.

Designed by Rem Koolhaas it is located at an idyllic spot on the riverside. Koolhaas’ subject is the unchecked growth of cities in the era of globalization and he tries to visualize the connection between modern societies and architecture. He created a hybrid embassy building which combines different functions and a pathway within an exterior shell. 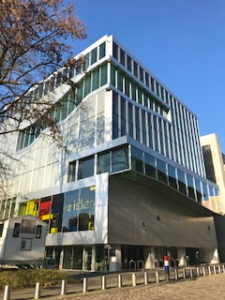 The main idea is that a public path, called „Trajekt“, continuously engulfs the interior and as an extension of the street leads up to the roof of the building. In a kind of system of ramps, the path winds along the facade and in a dynamic fashion opens various room levels. This is referred to as a „split-level“ system.

The building consists of a glass cube whose double walls work as a passive heating as well as a ventilation channel. The interior of the building appears to be a labyrinth and it is based on a logically organised horizontal and vertical communication network.

Apart from stunning new architectural oeuvres Berlin has quite a few architectural aberrations. These eyesores owe their realization to difficult times, such as after war or during the division. Even after reunification lack of funds sometimes led to poor solutions.
Our slogan became „Berlin is poor but sexy“. Nevertheless, it seems that very many want to move to Berlin. And even though the cranes appear to turn and turn, Berlin growing in all directions, affordable living space seems to be on the decline. 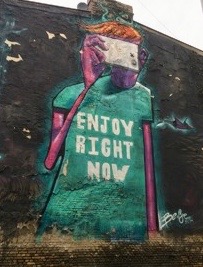 Still Berlin remains chaotic, colourful and diverse, worth seeing and visiting. You are cordially welcome to explore it with us. 🙂 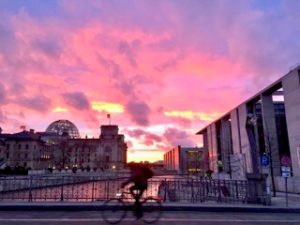