The citadel of Spandau

One of Berlin’s oldest buildings is, quite surprisingly, not located in the center or near the center of the city. It is located in the outskirts. I`m referring to an amazing fortress, the citadel in Spandau, one of two fortresses in Berlin. 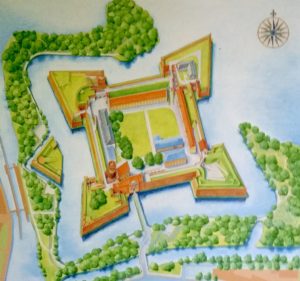 The Spandau citadel is one of the best preserved Renaissance fortresses in all of Europe. It was erected in between 1559 and 1594, designed by Italian masters, at the time the most highly regarded specialists in the field of modern fortifications. It is built in the shape of a square, each side with a length of 200 meters, protected at the four corners by bastions named King, Queen, Crown Prince and Brandenburg. The whole compound is surrounded by a stunning moat. 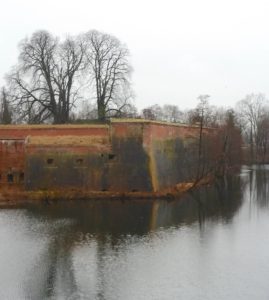 However, parts of the fortress are much older than the Renaissance period. The so called Julius Tower, with a height of 35 meters, was erected in the 13th century as part of a medieval fortification and was integrated in the later Renaissance fortress. This tower is probably the oldest secular building still existing in Berlin. There is an interesting story connected to this tower: As a result of its defeat in Franco-Prussian War of 1870-71, which, by the way, led to the founding of the German Empire and thus the unification of Germany, France had to pay an enormous amount of reparations to this newly founded German Empire. In 1874 Otto von Bismarck, nick-named „The Iron Chancellor“, decided that this tremendous treasure of gold was to be brought to the citadel. So gold, worth about 120 Million Reichsmark at the time, was stored in the Julius Tower.

It is a pity that a lot of tourists miss this very interesting building simply because it`s located on the periphery of Berlin. So, if you have the time and would like to see more than the standard things to see in the city center, enjoy the ride to the district of Spandau and visit this unusual structure. It is definitely worth your while!